This picture was taken near Mount St. Helens at the edge of the blast zone from the 1980 eruption. There was absolutely no traffic, so I couldn’t resist taking a ‘feet shot’:

So – if a volcanic eruption causes a tsunami, which way do I run? 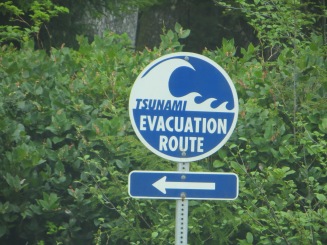 Life lesson: You haven’t lived until you’ve been passed by a logging truck at 60 mph in the rain. It’s a blast. Literally.

I passed a farmyard full of fowl – turkeys, chickens, ducks, geese. When they saw me they all came running.  The hens made me laugh out loud.  I was too slow on the trigger to catch their cartoon-like barnyard dash, so hopefully this YouTube video will suffice.  Yeah, the ‘fowl play’ looked much like this: Chickens

Those darn tourists, they hitch a ride then do nothing but snap pictures! 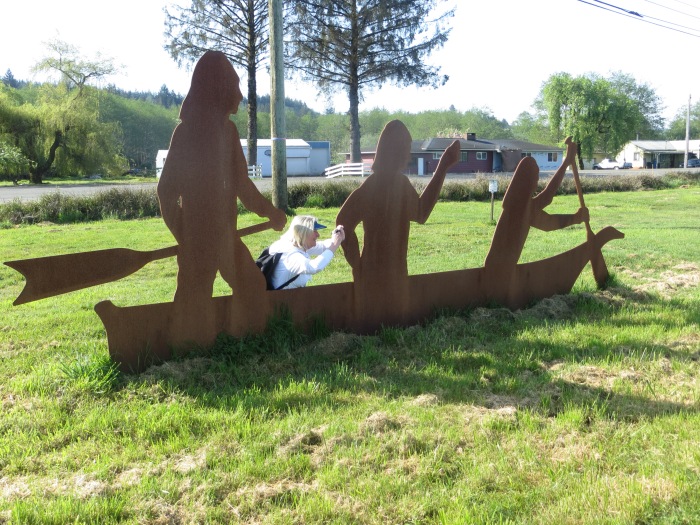 In my final full day in Washington, I got to ‘speak in tongues’ with a curious river otter and 2 of his friends – where’s Doctor Dolittle when you need him? Always take time to chat with the locals, even if all you can do is grunt.

At least the otter wasn’t a ‘scaredy-cow’:

Stranger danger? Actually, this was Danny coming to meet me – always a welcome sight… sadly, he had just missed the otter-banter. 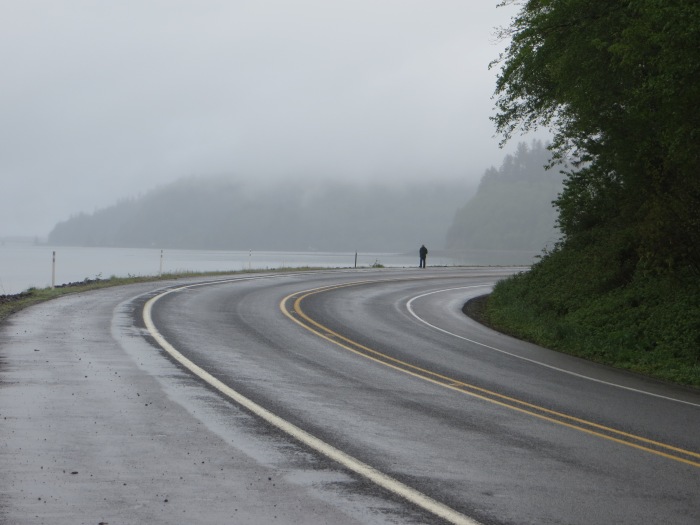 Strange road debris: A bag full of corn cobs. No corn, just the cobs.  Apparently someone had eaten all that corn, collected the cobs for who knows how long, then chose to contribute their ‘treasure trove’ for the beautification of Highway 8.

I was enchanted on one particular morning with what appeared to be an innocent deer on the edge of the property – but she was actually a perp ‘casing the joint’ prior to committing a crime. I had no idea that the target would be my host mom’s roses. I had the opportunity to report suspicious activity and I failed…

My car got to go to the beach! 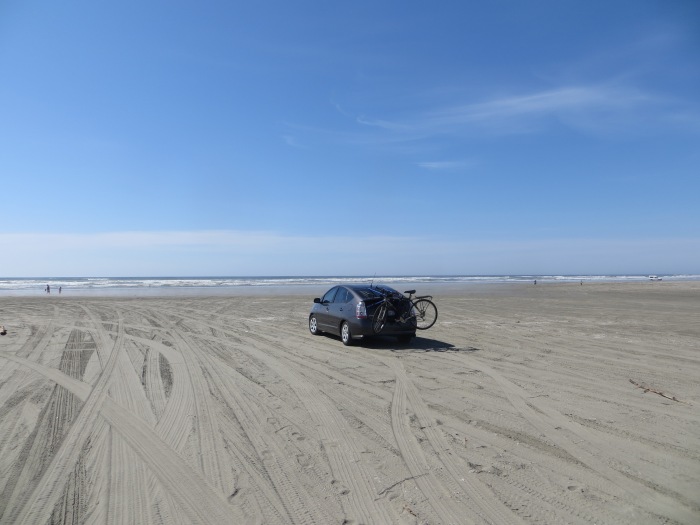 Initially I was disappointed that this duck’s lady friend exited the pond before I could take the shot (maybe she wasn’t sure what kind of ‘shot’ I was taking), but the crater she left in the water at takeoff was pretty cool:

Joyce, WA: Home of Uptha Creek, Itsa Creek and Bytha Way – and we have yet another:

As Danny & I were touring around Washington, we passed through a town named Vader and saw Darth in a car (yes – really). Then we dead-ended into Ryderwood, a community for retirees – and it was Prom Night. They were having their ‘Sr.-Sr. Prom’ that very evening. We saw a few of the arrivals, decked out for the occasion! 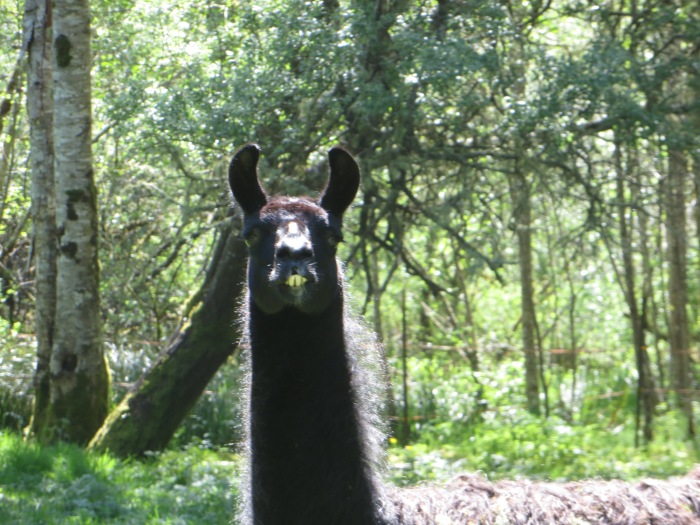 We came upon Ras Ible heading out into the remote areas north of Naselle. I didn’t know what to expect when I saw him, but I knew I wanted to hear his story – and he is a very interesting fellow.  He had just begun a journey to walk with his tiny house (rickshaw-style) to Washington D.C. for a number of causes. As you can see in the picture, one of them was legalization of pot in states where it’s not. But he was also walking for the homeless and in support of veterans – my brother is a Vietnam vet, so they found some common ground. Ras has also fought for and won several battles for pedestrian safety and access, which – in my current situation – gave us some common ground as well. Ras & I don’t agree on everything, but he’s a Patriot. I was pleased to meet him and we’re praying for each other for safety on our respective journeys.

I had a chance to do a good deed in Raymond. Danny was off running an errand, and I was sitting in the motel room. I saw a couple of kites go flying by, unattended.  One got plastered up against a chain link fence at the back of an adjacent field, and the string of the other got snagged on that same fence, with the kite still flying. I walked against the wind for a few blocks & eventually found a mom, dad & 2 kids with sad faces. I told ’em they could retrieve their kites & where to find them and we turned those frowns upside down! 😀

Can’t close this out without a sunset shot – we saw so many eagles that it seemed fitting to include this Raymond metal sculpture from our last night in town:

‘Bytha Way’… this talented artist has sadly passed away.  He left his sculpture designs to the city of Raymond, but they haven’t found anyone who can duplicate them using his unique method. I found this out when I tried to buy some small token of his art at Ugly Ed’s, the local shop that advertises the metal sculptures for sale. Are there any talented artists out there who would like to take on this locally iconic legacy?

Me & my bro – thanks for the memories:

“Then you will go on your way in safety, and your foot will not stumble.” ~ Proverbs 3:23

One thought on “Potpourri (3)”