I had a ‘God moment’ yesterday…

We had just returned from a wonderful (but short) weekend in Lake Tahoe.  We were there to help out our son & daughter-in-law with our 7-month-old granddaughter while they attended a wedding. They were staying right on the lake with the rest of the wedding party, but our son had arranged a cabin for Larry & I just a few blocks away.

It was a cute, cozy little place, but one of the things I liked best was a plaque in the bathroom that said, “Be strong and courageous. Do not be afraid or discouraged, for the Lord your God is with you wherever you go.” ~ Joshua 1:9.

The verse hit home with my feelings about the trek.  It’s perfect, and it will be my anchor verse through the miles when I’m feeling weak, discouraged, and fearful.

Here’s where things get cool:

If you’ll remember, in my July 29 post I said that we went to the Church of Living Water in Olympia, WA after a very disappointing first day on the road as we did our dry run (See ‘Bad Guys & Bed Bugs).

The pastor’s sermon was entitled, “Fighting from Victory”, and I felt that he was speaking directly to Larry & I and to our dispirited feelings on that day. We left feeling SO uplifted, and when we got back home I looked up that sermon to see if it was available to listen to again.  It was, but I didn’t listen to it immediately – however, I did it yesterday.

I hope Pastor Jon Cobler won’t mind if I quote some of his closing remarks from that sermon:

“…We need to take courage in the Word of the Lord. By ‘courage’, I don’t mean feeling brave – because there are a lot of people that feel really brave, but never get off the couch. And there are a lot of people who are scared to death, but take on impossible challenges. When we talk about having courage because of the Word of God, we’re not talking about you feeling brave – we’re talking about you taking that ‘mustard seed’ of faith and offering it to the Lord for simple obedience, and letting God grow it into something that will move mountains.

…There was a time in my life where I had a decision to make, and I was scared to death… and I will never forget – it was one of those times where I thought I knew what God wanted me to do, but I didn’t have the guts to do it. I remember I opened the Bible and there was a bookmark. A little piece of paper that was torn off and it was stuck right in the first page of Joshua, and I didn’t put it there… I’m convinced to this day that God put it there…. On it, it said “Joshua 1:9”, and I looked and it says, “Have I not commanded you? Be strong & courageous.  Do not be frightened.  Do not be dismayed, for the Lord your God is with you wherever you go.”… I took that and I anchored my soul in that Word… my life is different because of that incident, because the Word of the Lord gave me courage.”

As I listened to this sermon more than a month later, I had been waiting to hear one particular phrase he used on that Sunday morning – words that I had taken courage from in that moment.  He had said something like, “What journey is the Lord calling you to take?” – and on that day last month I grasped onto it with my entire soul because it was what I needed to hear.

Surprisingly, I didn’t hear that particular challenge anywhere in the recorded message – but I know he said it when we were there!  At the same time, I don’t remember hearing anything about Joshua 1:9 on that Sunday… But I saw it in that Lake Tahoe cabin, and heard it in the sermon playback. (Probably because the recording may have been made at their later service.) 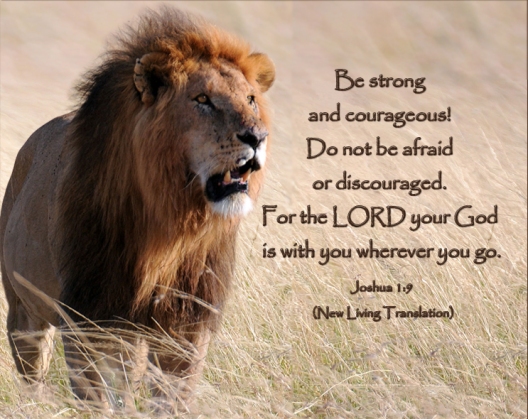